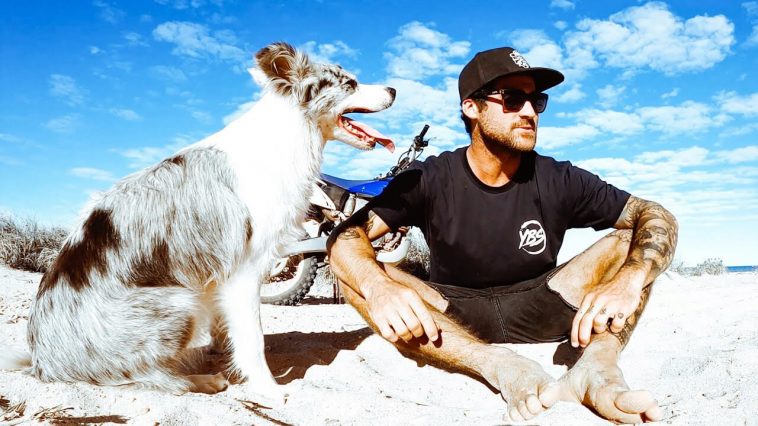 If you’re into spearfishing, it’s almost a sure thing you know Brodie Moss and his Youngbloods YouTube channel. In fact, those epic YBS videos might even be a big part of what got you interested in spearfishing in the first place.

I’ve been a big fan of their videos for years now. There’s just something magnetic about the passion Brodie has for spearfishing, and the love he has for nature and the sea.

Youngbloods, also known as YBS, is a YouTube channel created by the Australian Brodie Moss. While Brodie is the main face of the channel, and the one who makes the videos, the Youngbloods crew is made up of him and his close friends and family. The YBS Youngbloods are from Exmouth in Western Australia.

I think it’s best to let the crew describe themselves in their own words:

We’re just a small group of mates who share our adventures through film. Our hope is that by sharing our world we can motivate people to get out there and to give those less fortunate the opportunity to experience and see some crazy shit that they may never get to. We have a main crew but don’t want to limit it, we want to see YBS keep growing and growing. There are lots of friends, family, fans, all kinds of different people who create the Youngbloods and all you legends are the biggest part of it.

Where do the YBS Youngbloods live and spearfish?

The YBS Youngbloods live near the town of Exmouth in the state of Western Australia. They do most of their spearfishing and fishing by boat out from Exmouth, both in the open deep water, and around the nearby islands. They also do some trips along the coastline heading north from Exmouth, all the way up to Broome. Both Exmouth and Broome and much of the areas in between offer excellent fishing and spearfishing.

Why YBS videos are so good

It’s hard to point to just one reason why Youngbloods’ videos are so entertaining. It’s definitely all driven by Brodie Moss’s boundless energy and obvious love for what he does. Besides that, I think the success of YBS is due to a combination of the following:

^ This video showcases all of these features pretty well. If you’re unfamiliar with YBS videos, give it a watch… Or just rewatch it because it’s rad 😉

Brodie’s girlfriend is a young Argentine woman named Victoria Ferreira, although Brodie mostly calls her ‘Vicki’. They quite obviously had something going on for months, but he first called her his girlfriend in the title of the below video published to YouTube on January 23, 2021.

Vicki and some of her girlfriends were traveling in Australia when Covid lockdowns began, and by coincidence they became Brodie’s neighbors. They were selling something online and Brodie was tipped off to his attractive new neighbors and got in touch.

The girls eventually left and continued on their travels, but absence must have made the hearts grow fonder, and Vicki returned to Western Australia to become a YBS crew member.

Vicki appears in plenty of YBS videos, but if you want to see more of her you can follow her Instagram.

Brodie Moss also has a famous ex-girlfriend, the Playboy Playmate Amberleigh West. They have been broken up for quite some time now.

One of the YBS income streams is through selling merchandise, as well as their own spearguns and spearfishing accessories.

You can see everything they sell on their website youngbloods.co. They have very cool designs, going way beyond just plastering their logo on some t-shirts. I’m not sure who does the designs, but it may be Brodie’s friend D-Man who is also a talented tattoo artist.

Their spearfishing gear all looks pretty sick. It gets released very slowly, and seems to be out of stock more often than not, but I think that’s a good thing. They’re working with manufacturers and constantly testing and tweaking to make sure they get everything perfect.

Their wetsuits look great, their dive knives look ideal for spearfishing, and the custom spearguns handmade my Brodie’s brother “Jacko” (Jackson Moss) are gorgeous. I haven’t been able to try any of this gear, but if I ever get a chance I’ll be sure to put out a review for you all. From what they’ve shown in their videos though, they look like very high-quality products with insane attention to detail.

Note, if you’re not Australian, you might get a bit of a price shock when you look on their website. That $90 mask or dive knife is closer to $65 in US Dollars. Not exactly budget gear, but not at all unreasonable either.

Thanks for reading and drop a comment below if I missed anything, or to show your love for Brodie and the YBS crew. If you’re interested in spearfishing, check out the rest of my site. If you’re new to spearfishing, start with the post on How a speargun works.