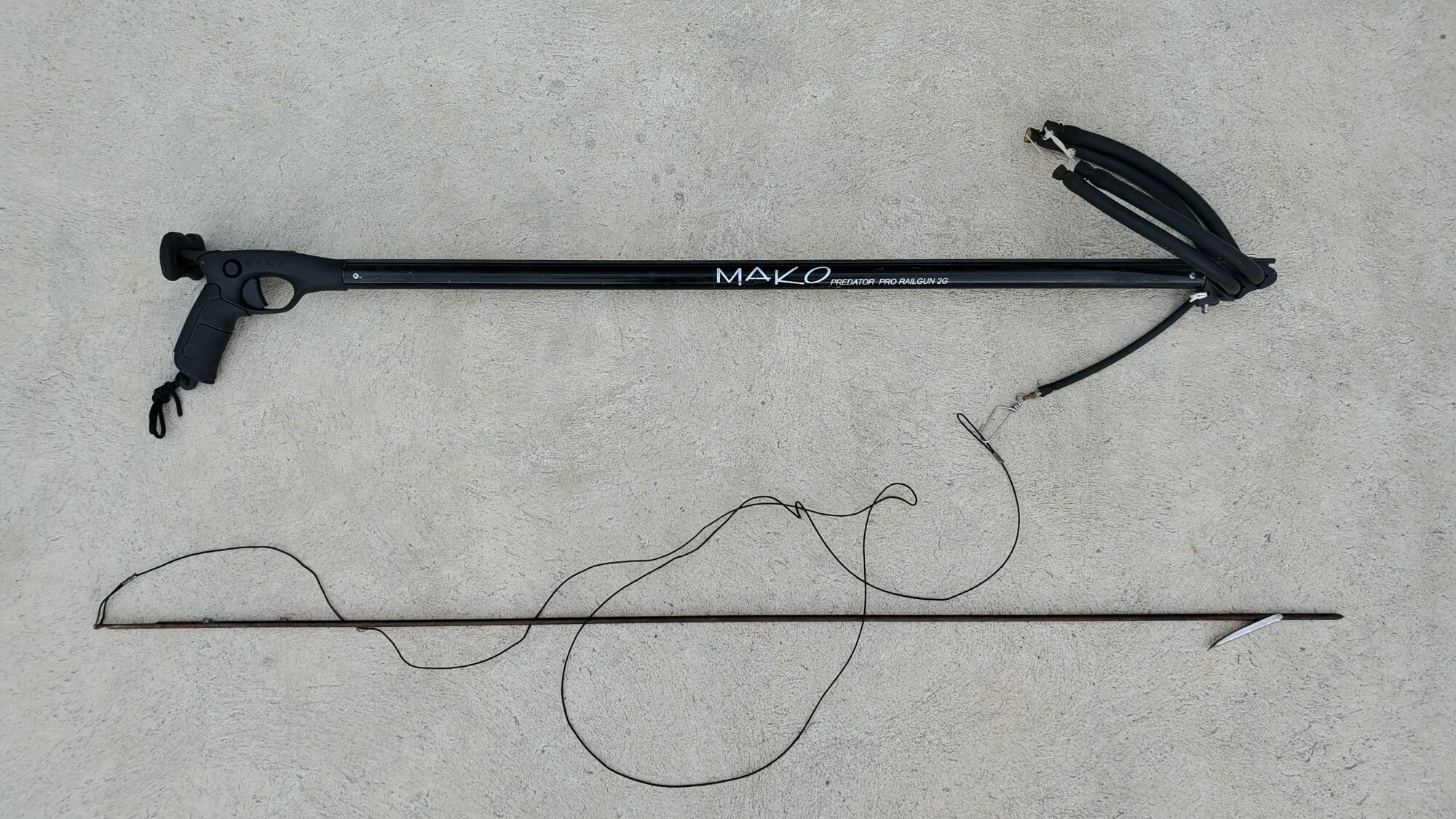 Spearguns are pretty simple, but unless you’ve used one you probably have no idea how they work. In this guide I’ll explain the parts of the speargun, how they work, and how you can use a speargun to successfully land a fish.

Most spearguns used today are band-powered. A band-powered speargun works like a combination of a crossbow and a slingshot. The gun is loaded by stretching strong rubber bands from the end of the barrel to the back of the spear. When the trigger is pulled, the spear is released and the rubber band snaps, propelling the spear forward. Less common are pneumatic guns which are fired by a sudden release of pressurized CO2.

That’s the basic explanation, but there is much more to it than that. Keep reading to find out all the gun’s parts, how the spear stays attached to the gun, and how spearos land big fish without them swimming away with the gun or pulling the spearo into the deep.

The parts of a speargun

Just about any speargun will have at least a handle with a trigger, a barrel, and a spear. The spear has a “shooting line” that connects it to the gun so that the fish can’t just swim off with the spear. There is also almost always a shooting line release that holds the slack in the line out of the way and lets it go when the gun is fired. Here’s a detailed breakdown of each of the parts.

Most spearguns have a pistol-grip type handle with a trigger, a safety, a line release, and a mechanism that locks the spear in place. When the safety is engaged, the trigger is locked, but when disengaged it can be pulled. Pulling the trigger will release the spear, letting the rubber bands snap back and propel the spear at the target fish. Pulling the trigger also simultaneously releases the shooting line so it has enough slack to reach the target (more on how the shooting line works below).

The barrel gives the spear shaft a place to sit and guides it straight when it is fired. Barrels can be made of almost any material but they’re commonly wood, steel, aluminum, or carbon fiber. The back of the barrel connects into the handle, and the muzzle sits at the end of it.

Barrel length is important and different types of spearfishing call for different lengths. For hunting in tight spaces and looking under boulders and in caves for fish, a smaller gun is more maneuverable. The shortest guns are used for this and they are typically 50-75 cm (19.7-29.5 in).

In the midrange, guns from 80-115 cm (31.5-45 in) are the most versatile and can work in shorter and longer range situations. These are often called “reef guns” as you’d typically use them around coral reefs or areas with lots of boulders where you will be shooting both fish hiding in the rocks, and swimming near the reef in the open water.

The longest barrels are on “bluewater guns” which range from about 120-160 cm (47-63 in). These are used to target big game fish, usually in deep water. Speargun lengths are almost always measured in centimeters, even in the US.

Guns typically have one or two rubber bands, but it’s not uncommon to see three or even four on bigger guns. Obviously, the more bands that are stretched back, the more tension there will be on the spear making it shoot faster and farther when the trigger is pulled. One band can either be two pieces of rubber, each anchored to one side of the muzzle, or a single piece that runs through a hole at the end of the barrel.

Where the band hooks onto the spear, there is a gap in the rubber and a so-called “wishbone” connects the two ends. The wishbone is what grabs the spear as the rubber is much too thick to do so. Wishbones can be made from metal, or from a high-strength cord, usually Dyneema.

The spear is a shaft of hard steel with a sharp tip. Behind the tip there is a flopper, a piece of metal riveted to the spear shaft so that it can can flop open to help hold a fish on. The flopper sits mostly flush with the spear when closed so that it is streamlined when the spear is released and it doesn’t slow it down. The flopper is also located under the spear so that once it passes through a fish, gravity makes it flop open thus (hopefully) securing your catch. The spear is longer than the gun itself, so the tip of the spear and the flopper always extend out beyond the end of the gun barrel.

The very back of the spear has a hole drilled through it where the shooting line attaches. There is also a notch here that engages with the trigger mechanism to hold it in place until fired. A short distance in front of this is where the wishbones attach the bands to the spear. The wishbone either sits in a notch that is cut into the steel, or on a so-called “sharkfin tab”, a small piece of steel welded to the top. There is usually one notch or sharkfin tab per band on the gun.

Spearguns can be set up either with a reel or without. Usually, if you’re spearfishing without a reel, you will use a float line — a rope attaching your gun to a float at the surface. Large fish are a lot stronger in the water than you are, and once you shoot one you need to get back to the surface to breathe. If you use a float line, you just drop the gun and fight the fish in by “playing it” on the float line.

A reel gun works differently. With this setup, the spear attaches to the shooting line which attaches to your reel line. If you shoot a big fish, you hold onto the gun and let the fish run and take out line from the reel. Then once you’re back at the surface, you play the fish in using this reel line either winding the line in or pulling it in hand over hand.

How the Shooting Line Works

This is the part of the speargun that I never understood until I actually held my first gun in my hands. I searched and searched and couldn’t find any explanation, which is part of the reason I’m now writing this guide all these years later. It’s actually pretty ingenious how it works. Note that there are two common setups, spearguns with reels, and those without. I’ll explain the standard shooting line first, then show the slight difference in rigging it for a reel gun.

Spearguns don’t have great range, but they can still travel a few times longer than the barrel length, meaning the shooting line that connects the spear to the gun needs to be around three times the length of the barrel. The line needs to be secured in place so it’s not getting tangled up and scaring fish, and it needs to run freely behind the spear when it’s fired and not slow it down.

It’s hard to explain in words how this works, but I’ll do my best. The photos should help, but watching the video above should make it much easier to understand. Let’s follow the shooting line to see how this works for standard guns, and guns with a reel:

Shooting line on a reel gun

The setup is slightly different on a speargun with a reel. The shooting line still hooks over the top of the spear, then back down the barrel and around the line release, then it travels halfway back up the barrel, but there it attaches to the end of the reel line. The shock cord is removed.