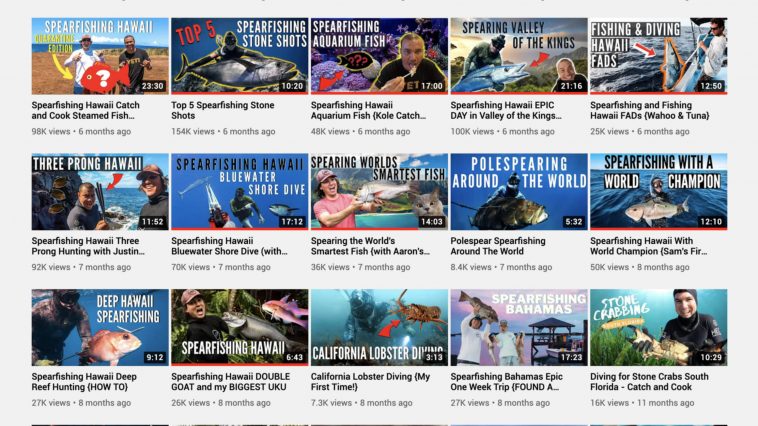 Whether you’re new to spearfishing, or you’re a grizzled veteran spearo, chances are you still enjoy watching other people out shooting fish when you can’t be in the water yourself.

If you’re looking for some new spearo YouTubers, here are my favorite spearfishing YouTube accounts to follow to get your fix:

My undisputed favorite spearos on YouTube, Brodie Moss and his Youngbloods crew shoot epic fish in the stunning clear waters of Western Australia.

They sometimes go entire episodes without spearfishing, but it’s still so entertaining watching them fish, explore, freedive, search for mud crabs in mangrove forests, and just generally hang out and obviously all love each other. The amount of eye candy doesn’t hurt either.

YBS gets bonus points for actually manufacturing their own spearguns and spearfishing gear, which is pretty damn cool. For more about the crew, check out my post All About YBS Youngbloods.

Ryan and his girlfriend Sam are Floridians currently living in Hawaii. Ryan is an accomplished spearo who often dives 40 meters+ (130 feet+).

What’s great about these videos is the amount of spearfishing action you get to see, usually narrated by Ryan. It’s great getting the play by play of the things he’s doing as there are a lot of great tips that spearos of any level can use to improve their craft.

Ryan doesn’t just point out what he does right either. He is upfront about all the mistakes he makes and the things he would do differently.

Besides spearfishing, they also do some bow hunting, and a lot of cooking. Sam is a firecracker, and the two of them have great chemistry on camera.

Daniel Mann is another YouTuber I’d put in the “educator” category. While he doesn’t do quite as much play-by-play as someone like Ryan Myers, his instructional videos are all really well done and useful.

His channel has a whole playlist full of videos with tips for hunting specific fish species and they’re all very well done. He also has good tips on rigging guns for different types of spearfishing.

It’s not all classroom material though. Daniel Mann also has plenty of great content that’s just pure spearfishing joy, and he has videos from a lot of different locations, some quite unique like Norway.

Kimi Werner is an absolute spearfishing badass. She dives deep and long and is absolutely fearless even around sharks. For such an accomplished spearo, her channel features relatively little spearfishing content and skews much more to the food prep side of things.

Still, it’s really great content and I always enjoy watching her videos. Her videos featuring her adorable baby boy Buddy and husband Justin are just so wholesome and nice.

Kimi is also a native Hawaiian and she shows some really cool recipes, often using what people elsewhere might consider “trash fish”. The deep love and respect that Hawaiians have for the ocean really shines through in her videos.

B2B Adventures are a couple of Australian guys — Az & Strick — with a passion for the sea, for life, and for spearfishing. They catch some pretty amazing fish in absolutely stunning locations, but it’s the enthusiasm and the obvious fun they are having that makes their content great.

Back 2 Basics Adventures videos are sometimes just Strick and his girlfriend Fran spearfishing their local waters. Other trips Az goes along to places like the Great Barrier Reef. Some of their most epic content though is when they venture out further to places like Vanuatu and the South Pacific.

RoKKiT KiT is the channel of an Australian guy called Rod. He occasionally spearfishes, although he does much more rod and reel fishing from a kayak. I’m not personally that into regular fishing, but I really enjoy Rod’s content.

I think it must be the remote island camping trips RoKKiT KiT does on his channel. I love that sort of Robinson Crusoe type content, and if you do too, you’ll definitely dig RoKKiT KiT despite it being a bit light on spearo footage sometimes.

Rod is also a better cook than your average YouTube Spearo (looking at you on this one, Brodie Moss LOL)

Adreno is not really a YouTuber so much as the YouTube channel of the Australian spearfishing outfitter Adreno. Still, they have some pretty good content that any newbie spearos should check out.

Adreno has a lot of ‘how-to’ videos from their in-house experts on everything from choosing a speargun, rigging it properly, staying safe freediving, and tips for targeting different species. Highly recommended for newbie spearos.

Dejan Sverko is an experienced spearo doing trips out to remote Indonesian islands. The coral reefs in his videos are some of the most pristine anywhere in the world, and the seas seem to be healthy and teeming with life.

Dejan gets a lot of fish, and a lot of different species in his spearfishing videos on YouTube. It can almost seem excessive at times, but I do think he varies his spots enough, and the locals on the islands he visits are no doubt happy to have the extra fish. His Indonesia language skills seems pretty on point as well.

Ollie Craig is a Kiwi putting out very solid spearfishing content. It’s cool just seeing the different fish species they get in New Zealand, as well as the techniques they use there to get them. In the video above, the guy is literally diving with a hammer to smash open sea urchins to chum the water.

His subscriber count is currently the lowest on this list, but he puts out quality content on a regular basis, so it’s surely going to grow exponentially from here.

Who did I miss? Let me know in a comment below. Happy hunting!