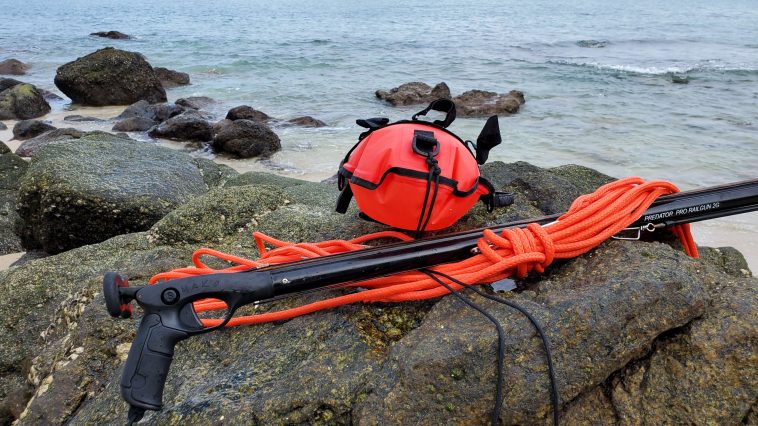 We all see these guys on YouTube, always diving in crystal clear waters, complaining about bad visibility when it gets down to eight meters. For most of us spearos not living in such pristine places though, spearfishing in bad visibility is simply something we have to do. If we only went out when the vis was great, we wouldn’t clock many hours in the water and our freezers would be barren.

Spearfishing in low visibility water is absolutely possible and highly recommended. Not only can you spearfish in murky water, but going out in these conditions will sharpen your skills and make you more comfortable in the water. Once you get used to spearfishing in poor visibility, you’ll be an expert when you get out there on the good days.

How do I know?

I learned to spearfish while living on the island of Koh Chang in Thailand. That might sound like a clear-water paradise to you, but in reality the island is quite close to the mainland where a large river spills out into the sea, and shore diving there usually means bad visibility.

The one redeeming factor there was that the water temperature was warm. For most of the year, I could stay out for four, five, even six hours in board shorts and a rash guard. If you stay out long enough, you eventually get some fish.

I’ve spent hundreds of hours honing my low-visibility spearfishing techniques. Some of these are dependent on the area you’re fishing and the species around, but no matter where you spear, some of these tips will help you bag more fish on the days other spearos stay home.

The absolute most important part of spearfishing in poor visibility is staying calm. Most fish have sensory perceptions that allow them to feel movement and electrical signals. Even if they can’t see you, they can probably feel you there. Small controlled movements may not scare them off, and can even intrigue them, but any flailing arms or fins scraping off rocks will completely spook them.

This is fairly true for spearfishing in any conditions, but the fish get extra skittish when visibility is low.

Spearfishing in bad vis is a great opportunity to get more comfortable in the water and to learn to control your mind to get better dive times. There is something inherently creepy about being in the water when you can’t see what’s around you, and it takes getting used to. Even experienced spearos can get a case of the willies while descending through murky water where you can’t see the bottom until you practically crash into it.

You need to learn to keep your heart rate low, and not let your brain scare you into thinking you’re already out of oxygen at the start of your dive. This is a skill like any other, and only practice will get you there.

Low visibility conditions are the main cause of seasickness. if this is ever a problem for you, check out my post on seasickness while spearfishing.

Not all bad visibility is created equal, and the difference between being able to see three feet and five feet is major. You should try to predict when the conditions will be best to gain that extra bit of vis. Doing so will give you a huge advantage.

If you’re in the sea, fishing during slack tides (the absolute high and absolute low tide) when the water moves less can make a big difference. If the sediment causing bad visibility comes from a nearby river, conditions will likely be worse when the tide is falling. At the high tide point is when you will have the highest proportion of fresh seawater in, and the least amount of river water flowing out.

Whether you’re in the sea or in freshwater, wind is one of the worst culprits for stirring up sediment, so keep an eye on wind reports. If it’s been blowing nonstop the last three days, maybe give it a pass. If you see a few days break in the wind, it’s probably a good time to get out there.

Keeping a log each time you go out, including the visibility and the species you see, plus any notes on the conditions that day and for the few days previous is a great idea. After a year or two of doing this, you should have a very good sense of how the visibility will be at any time, as well as what fish you’re likely to find.

3. Use a shorter gun

If you’re using a long speargun in murky water and can barely even see the tip of your spear, it’s pretty unlikely you’ll be able to see any fish out beyond that. For that reason it’s best to use a shorter gun when spearfishing in bad visibility.

Ideally, you’ll want something in the 60-70 centimeter range if the visibility is really bad. If you hunt in those conditions often, you might consider getting a cheap shorty speargun.

Personally, I love a 90 cm gun as a sweet spot that lets you hunt in low visibility, but also get bigger game fish.

If you’re looking for an inexpensive shorty gun, check out my review of the Mako Predator Pro for why I think that’s your best bet. I own the 90-centimeter version and it’s my multi-tool speargun that I know I can take anywhere and get fish.

Sometimes the visibility can vary dramatically between one spot, and another even just a short swim away, Try moving around to see if the visibility improves. Sometimes getting to the other side of an island, a reef, or a rocky point can make a huge difference.

Getting further away from the short can also yield better water clarity. Sometimes you just need to swim around, or get out and walk a bit to find better spearfishing conditions.

Besides moving between spots, visibility can change between water depths. Sometimes where it’s murky at the surface, it will be better down below. Other times it’s the reverse. If you find better water clarity at a certain depth, move to an area either deeper or shallower, where the bottom is in the depths with the clearest water.

For both your stealthiness and your safety, it’s important to keep yourself as streamlined as possible when spearfishing in low visibility. Any fish stringers, lobster bags, and anything else you might carry on your belt should be kept on your float at the surface.

If you leave these things dangling off of you, they’re sure to snag, scrape rocks, spook you, and just generally scare fish off.

See this guide for why I believe all beginner spearos should use a float.

7. Let the fish come to you

There are two primary techniques for spearfishing along the bottom, no matter what the water visibility is: 1: staying still and waiting for fish to come to you, or 2: actively seeking out the fish. Both can apply to spearfishing in poor visibility, but staying still is probably the better bet for beginners.

Make a point of being as calm as possible during your duck dive, your descent, and your landing. Hit the bottom slowly and quietly, and make sure you don’t stir up any sediment which would reduce the already bad visibility.

It’s best if you can hit the bottom, and then stay still for at least a minute before you need to surface. This will give you the best likelihood of a curious fish coming in to check you out.

If there is any current, position yourself so the current comes from behind you. Most game fish hunt into the current, and you want them swimming into your field of view from the front.

One thing that can really help is to keep your head fixed in place and your vision trained on a small area where you think a fish will most likely appear. You might cast a wider net by turning your head back and forth to visually cover a larger area, but it won’t do you any good if that motion scares away all the fish.

Focus on one area, and be ready to shoot any fish that enter your field of view. At the end of your breath, you can take a look around to see if anyting has snuck in on your side or behind you, but keep your head still while you try to draw fish in.

Finally, any clicking or scratching sounds that normally work to draw in your target species should be tried in low visibility conditions as well.

8. Get low and use silhouettes

You can almost always see much further through murky water when you’re staring up at the surface. One of the best tricks for spearfishing in bad visibility is to dive to the lowest spot, often next to some cover from a coral bomby or a boulder. From there, look up and hope a fish swims by between you and the surface. The fish will stand out in stark contrast as a silhouette in the bright light from the sky behind it.

If lying still on the bottom and waiting for the fish isn’t working, sometimes you’re better off moving around to actively search for fish. In the Gulf of Thailand where I mentioned that I learned to spear, this is often the best strategy for finding fish when the visibility is bad.

Two species in particular are what I look for: coral trout, and honeycomb grouper, aka spotted rock cod. Both of these fish typically hold their ground and are less skittish than other fish even in low visibility. Both will turn and just stare at you making them a good bet for when the visibility is bad.

Your local area probably has certain species that are easier to find when the visibility is bad. With enough experience, and hopefully some local knowledge, you will eventually figure out what those are and how you can spear them.

The most important thing when spearfishing in any condition is to stay safe. Take extra precautions when the visibility is bad and avoid areas you know to hold a lot of old fishing lines or other entanglements.

You should always dive with a buddy, and when visibility is low you should let your buddy know your plan for each dive so you don’t accidentally come up in the area he or she is pointing their speargun.

For more on safety, check out my post on the dangers of spearfishing.

As I mentioned at the top, honing your spearfishing skills and techniques in low visibility water will make you a better spearo in all conditions. Like all things in life, the only way to get better is to put in the hours, and if you don’t live in paradise, that means spending a lot of time spearfishing in murky water.

I suggest you not only get out there and do it, but enjoy every minute of it. Low visibility is less than ideal, but I’ll still take that over being bored on land any day.