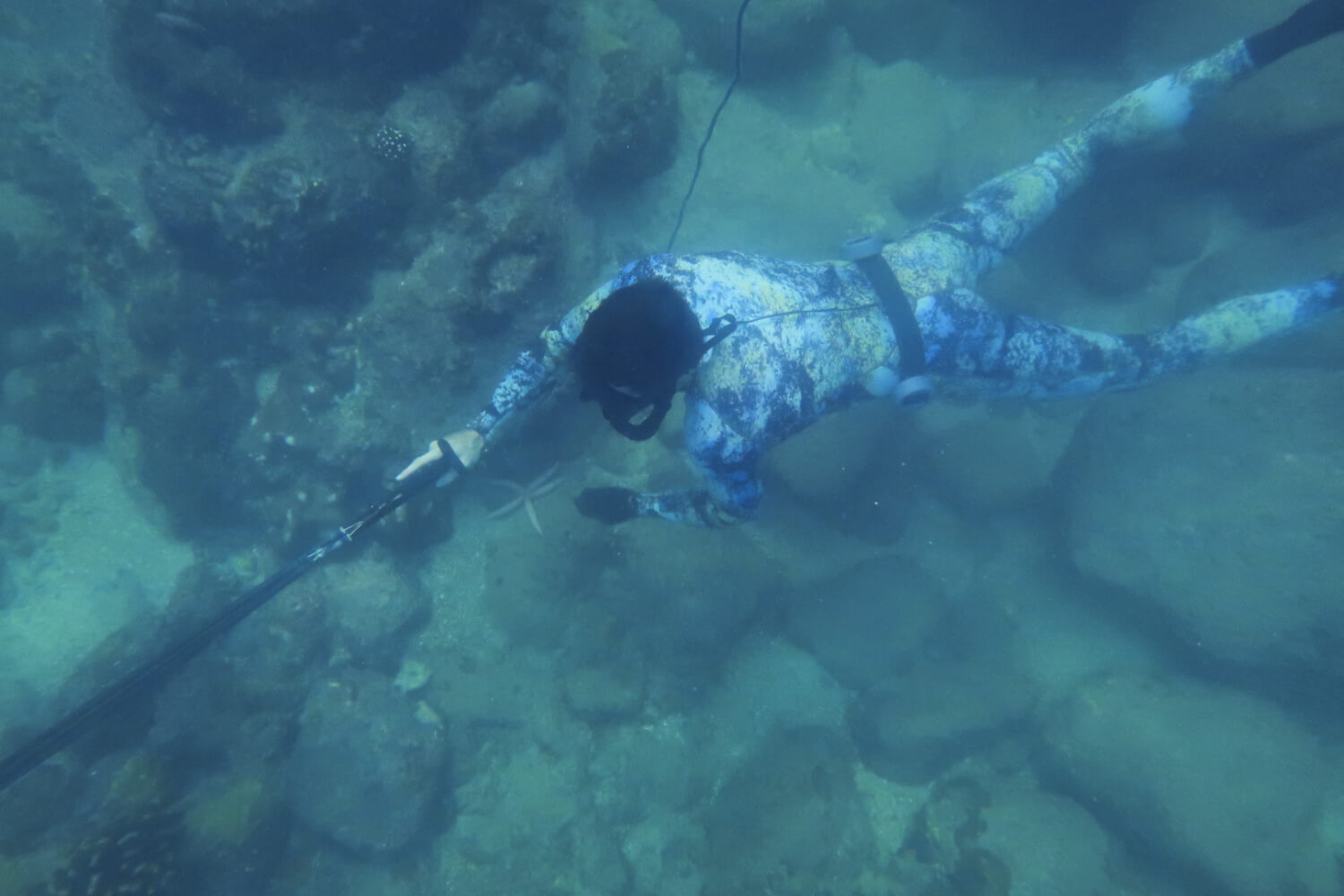 If you’re getting ready to buy your first speargun, you’re probably thinking about whether or not you should get a reel. This guide gives a quick explanation of the differences between using a gun with a reel, and using a float line, and it weighs up the pros and cons of each method. The short answer is that you should buy a gun with a reel that easily detaches, but leave it at home your first few times out. Read on for the longer answer.

This is the quick and dirty difference, but for a full explanation, see my post on How a Speargun Works.

In most speargun setups, the spear stays attached to the gun so that the fish can’t swim away with it. With a standard setup, the spear is attached by a shooting line roughly three times the length of the gun barrel. With a reel gun, the shooting line attaches to the reel line which can spool out extra slack.

If you shoot a big fish with a reel gun, if the fish or spear gets stuck under some rock or coral, you can let out slack and return with the gun to the surface to breathe. With no reel, this is not possible, so spearos usually attach a rope (called a float line) from their gun to a bouy (called a float) at the surface. In this way, if the spear is stuck or a big fish takes it for a ride, the spearo can drop the gun, swim to the surface, and still have a rope attached to the gun and spear.

Which is better for newbies?

While everyone’s situation is different, I can say pretty broadly that a new spearo should be using a float line. I’ll go over the reasons why below. That doesn’t mean though, that you shouldn’t buy a reel gun. If you’re on the fence between the two, and you can afford to pick up a reel along with your gun, you should do so.

A reel can be added to and removed from the gun pretty easily. Your first few times out though, it’s best to leave the reel at home and just use a float line. Also, once you do start trying out the reel, you should continue using the float line with it, at least for a few more diving days.

Advantages of using a float line

Disadvantages of using a float

Spearfishing with a float and line does have its own drawbacks. Here are the disadvantages of using a float line. You could also call these the advantages of a reel-only setup.

For reels, it’s best to buy from the manufacturer of your gun to ensure a proper attachment.

There are a lot of floats you can choose from but this Salvimar float on Amazon is a solid budget pick. If you’ll be shooting bigger fish that will be pulling your float under, spend more and pick up the inflatable Sporasub Bluewater float if you need it to be portable. If it’ll live on your boat, get a Rob Allen foam float.

For float lines, also go Rob Allen and pick up one of their foam-filled lines. You can get them in any length here on Amazon.

So yeah, if you’re new to spearfishing, you should be going out with a float line attached to a float at the surface. It’s absolutely fine to buy a reel gun though. Go out your first few times without the reel on, and when you do start trying it out, continue using the float line along with it. Once you have some experience with both, you can decide which setup is best for you for any situation, and you can start experimenting with other rigging methods like breakaway setups.

If I missed anything or you have something to add, please drop a comment and let me know!