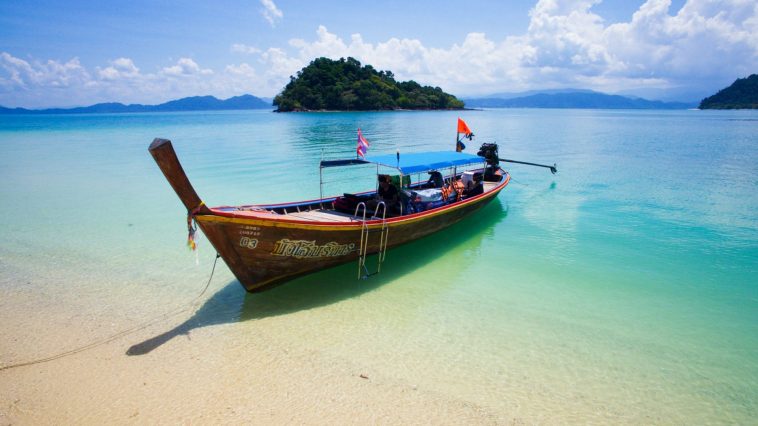 Thailand has been my home base for the last 11 years, and it’s where I do the majority of my spearfishing. In all that time, I’ve stayed on the right side of the law and never had any issues. This guide will show you how you can do the same, plus point you toward where to buy gear, where to spear, and local resources for the most popular destinations.

Spearfishing in Thailand is fully legal in most areas, but there are national parks and marine reserves where spearfishing is strictly prohibited. There are also certain fish species that you cannot target. No fishing licenses are needed for any recreational spearfishing or regular fishing activities in Thailand.

While spearfishing is legal in Thailand, it can be a grey area in a country where laws are enforced selectively and unevenly. There are areas that are technically legal to spearfish but where you are not allowed. There are also spots that are protected, but where locals can get away with some spearfishing.

See the section below on protected areas for more, but in general you should avoid areas that are popular with snorkelers. I do sometimes spearfish at popular scuba diving spots if they are not in protected areas, but never when dive boats are around. Even then, I will only shoot pelagic fish in these areas and leave the grouper, coral trout, snapper, and other reef fish for the divers to see, no matter how tasty they might be.

As in most places, spearos are often misunderstood, and this is partly due to local and foreign spearfishermen that shoot basically anything that moves. Please be respectful and conscientious, and take what you need, not what you can.

Spearfishing on Scuba in Thailand

Spearfishing in Thailand using scuba gear is not allowed. You can only spearfish on apnea (freediving while holding your breath). While I can’t point out the exact law banning this, I would highly highly recommend you steer clear of it.

The scuba community already dislikes spearos enough, and local spearos dislike what they see as cheaters using an air supply to get an unfair advantage. If you make enemies of everyone, you’re asking for trouble in Thailand.

Spearfishing from shore vs from a boat

On most Thai islands and mainland areas, visibility is very hit or miss near the shore. These areas are also pretty overfished by locals using homemade spearguns and from constant gill net fishing.

Still, most of the hours I’ve spent spearfishing in Thailand have been from shore. This has helped me hone my techniques and learn vast amounts of patience. I’ve also landed hundreds of nice snappers, groupers, grunts, queenfish, barracuda, trevally, mackerel, and other species by putting in the hours from shore.

Still, if you can get out spearfishing in Thailand from a boat with a halfway knowledgeable guide, your likelihood of landing nice fish will increase dramatically.

It can be difficult to tell which areas are protected and which are not. Unfortunately, I still haven’t been able to find any resources that can consistantly show the boundaries of protected areas.

In some cases, an entire tourist island is a National Park. This is the case in Koh Samet, where you have to pay a national park entrance fee just to step foot on the island. I would not recommend trying to spearfish there.

Other islands like Koh Chang (see section below) have large protected areas in the interior, and a large protected marine reserve offshore, but most of the coastline and many nearby small islands and pinnacles can be spearfished.

If spearfishing is an important part of your trip itinerary, you should avoid the iffy islands and go to one of the recommended destinations listed below.

When in doubt, there is no substitute for local knowledge. Ask around.

When I see news here of reckless spearos getting busted, it’s more often than not for what they shoot than for where they shoot it. Avoid shooting the following species:

In general, you should avoid shooting any pretty reef fish. Any police who might stop you probably don’t know the exact laws, but they’ll have seen photos of people getting busted for shooting colorful fish. For this reason, I would avoid shooting species like striped surgeonfish, even though they’re abundant. I also don’t shoot harlequin sweetlips or oriental striped sweetlips for the same reason.

Fish you can catch

While Thai waters are fairly overfished in general, a good spearo in the right place can find just about any fish you could want to shoot, including:

I have personally seen marlin before, but I believe there are too few around to feel okay shooting them. Best to let them be. I have yet to see mahi-mahi (dorado/dolphin fish), but I’m sure there are some around somewhere.

Spearfishing gear can be found pretty easily in Thailand, but it’s expensive. The demand here is not very high, and that combined with high import tax means a speargun will cost about double what you’d pay for it back home.

If you are looking to buy a speargun in Thailand, you can contact me as I will sometimes have lightly used spearguns that I’ve reviewed for this site.

Some of the destinations below have shops that sell spearguns, and some of those can ship within Thailand.

There is a guy living in Koh Samui who is the Thailand rep for Rob Allen. He can get any Rob Allen gear you need with some lead time, and usually has a few guns and accessories in stock. You can contact him through his website.

You can also buy some Pescador Sub spearguns and accessories from an experienced spearo named Herve who is living near Pattaya. In the section below on Pattaya, Herve is also who I recommend getting in touch with if you want to go spearfishing around that area. Contact him for gear or a Pattaya spearfishing trip via his Facebook page Spearfishing Marketplace Thailand.

Sometimes you can find short spearguns from brands like Cressi for sale at the large sporting goods stores in Bangkok shopping malls. These tend to be cheaply-made guns and are overpriced, but if you are desperate it’s an option.

Phuket is probably the top destination in Thailand for spearfishing, but even here the scene is pretty small. There is a company called Phuket Spearfishing that you can easily find through Google, but they seem to be experiencing some sort of legal trouble and are not currently doing trips. They are not responsive to messages either.

The first place I’d check is Naiharn Blue Sport. You can buy spearguns and other gear here, and the owner Chai sometimes takes spearos out. He is a very good spearo and really knows the area and the conditions well.

You can try some of the fishing charter companies, but they will be pricey. They should know where to go to find fish, but they may not necessarily know good spearfishing spots.

There are some smaller islands off of Phuket that have good spearfishing. The best and most well-known of these is Koh Racha Noi. The wooden longtail boats that wait to take out tourists along Rawai Beach can sometimes take you out there, but it’s around two hours each way. There are also speedboats around here that could get you out and back faster, but I’m not sure what they would charge.

The sea is often too rough for the trip in a longtail boat. You’ll have the best luck outside of the monsoon season when the sea is calmer, but there are still no guarantees. The dry season runs from November to May. You’ll have to negotiate but a trip to Racha Noi should cost between 6,000 and 9,000 Baht ($200-$300 USD). The spearfishing out here is some of the best you’ll find in Thailand.

I am often in Phuket. If you are here and looking to go out, send me a message and we may be able to link up.

Koh Chang is where I cut my teeth spearfishing and there are a lot of areas that are okay from shore. Visibility is usually not great though, especially if you’re used to good conditions. You can find much better areas if you go out on a boat, but this is harder to arrange in Koh Chang than on other islands.

There is one experienced spearo named Marc who is currently taking people out to the HTMS Chang wreck. This is probably the best spearfishing spot in the area. You can find information about his trips on this page. Marc can sort out a speargun for you but you’ll need your own gear otherwise.

If Marc is unavailable, you can try to arrange something else. I used to sort out an occasional trip just by going to a pier or canal where fishing boats are kept, but I can speak Thai. This will be hard to do if you cannot.

You can try asking a local tour shop to help you book but most of them can only really sell you tickets to join group expeditions. Try Coco Dee Bo tours in Chai Chet. They can sort something out for you, but it will likely be a larger wooden boat and it won’t be cheap. I’ve done this to go snorkeling and booze cruising with a group of friends and paid around 8,000 Baht for the day. This was fine between six people but it may be a bit steep for one or two spearos.

Because Koh Tao is so well known for scuba diving, locals there do not take kindly to spearfishing. I believe it is illegal there, but even if it is not technically so, you should avoid it anyway. You could find yourself in big trouble even being seen with a speargun there. Try nearby Koh Phangan or Koh Samui instead.

I don’t know much about Spearfishing in Koh Samui. There is one private trip with an experienced spearo that you can book on this site. The cost of a trip is 30,000 Baht (around $1,000 USD) so you’d probably want to split the cost with friends. He does have a pretty nice boat with a crew, so I don’t think the price is unreasonable. You will need your own gear.

Koh Kood and Koh Mak are similar to Koh Chang listed above. Private boats are hard to book and they are mainly larger boats so they won’t be cheap. The water clarity is usually better on these islands than in Koh Chang, and you can find decent shore diving. You should avoid crossing busy beaches and crowded resorts with your gear. Check on Google Maps to find a rocky area and an access point, and you should find decent spearing. Ask around and you might meet some resident spearos.

There’s not much suitable shore diving, but it’s not hard to arrange a spearfishing charter in Pattaya. This will not be cheap, but if it’s in your budget it’s a good place to try spearfishing out or get your fix while on your holiday.

There is a Spearo living around Pattaya named Herve who sells some spearguns, has others he can rent out, and might be eager to share the cost of a boat trip. He also obviously has some boat contacts. Contact him via his Facebook page Spearfishing Marketplace Thailand.

If you can’t work something out with Herve, you can try the following companies. I have personally never spearfished around here, and I can’t vouch for these companies, but you can book Pattaya spearfishing trips with these companies, at least according to their websites.