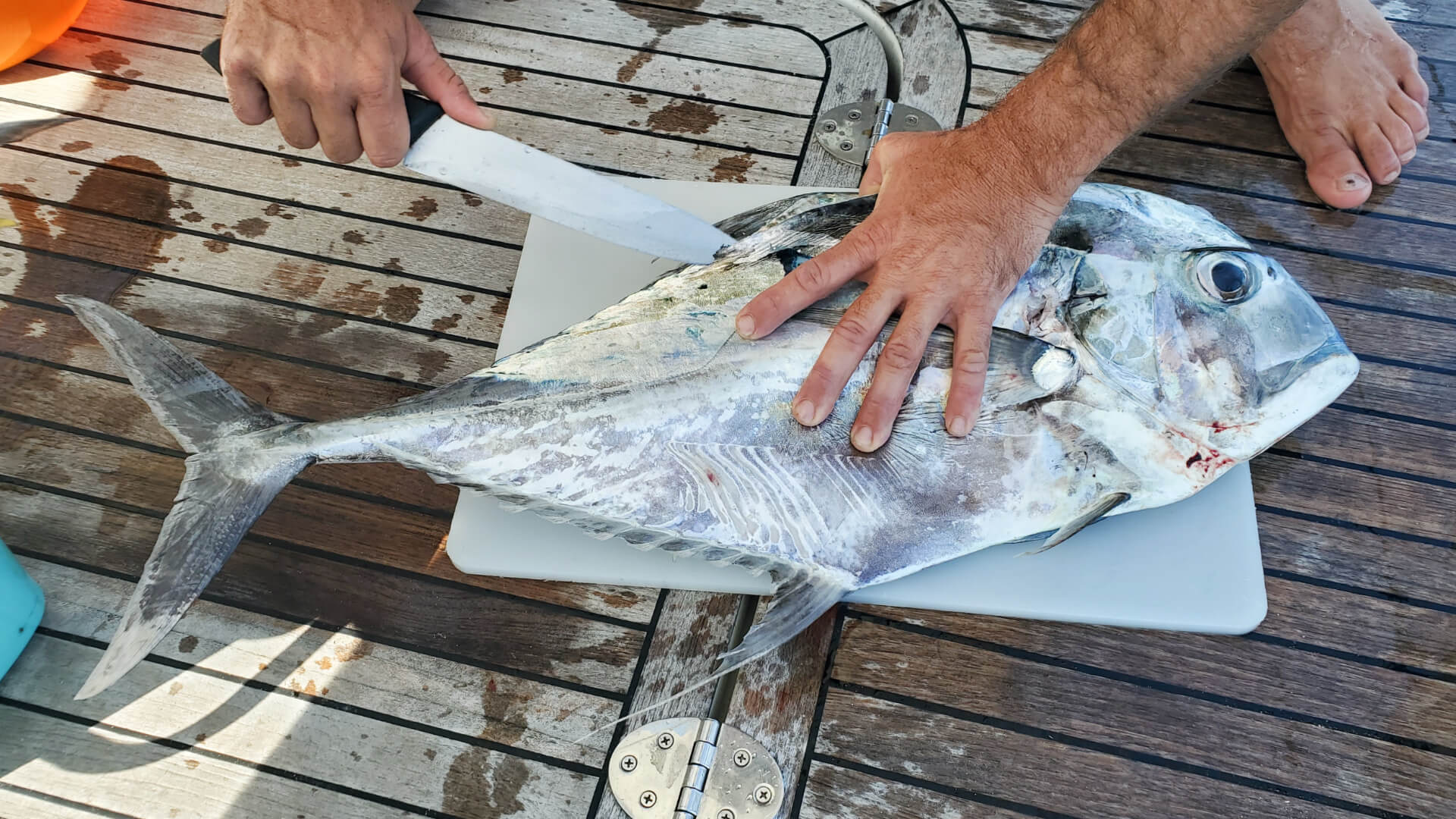 There’s a good chance that you’re killing the fish you catch in the wrong way. Most fish, whether caught by commercial fishermen or anglers, are left to suffocate on a boat deck or in a cooler.

There is a better way, and it’s not just more humane for the fish; it makes the fish meat taste better and stay fresh longer.

When a fish is left to suffocate out of water, its brain sends stress signals throughout its body. Muscles twitch causing a buildup of lactic acid, cortisol, adrenaline, and ammonia in the tissue. The process of putrefaction is greatly accelerated.

Usually when fish smells “fishy”, this is what you’re smelling. Fish killed the right way has almost no fishiness whatsoever.

On commercial fishing boats, they generally don’t have the time to kill each fish properly.

However, if you’re fishing with a rod and reel, throwing a cast net, spearfishing, bow fishing, or even noodling catfish, there is a better way.

The best way to kill a fish was discovered by the Japanese, which is probably unsurprising; the Japanese obsess about using quality ingredients more than any other culture.

Ikejime, which translates to “closing the fish”, is a method of killing that causes instant brain death. There are a few different ways of doing this and at the extreme end, it can get pretty complicated.

The highest level of ikejime involves making an incision at the head or tail end of the fish, and running a thin wire through the fish’s spine for the entire length of its body. Unless you’re supplying a world-class restaurant though, that’s probably overkill, pardon the pun.

This video gives a pretty good overview of ikejime.

The simple, humane way to kill a fish

At its most basic, ikejime simply involves stabbing the fish in the brain. You can use a spike specifically designed for this, or just use a knife. The brain is usually located in the middle of the fish’s head, just behind the eyes.

You will know when you’ve hit the brain as the fish will spasm and its fins will flare momentarily, and it will then go limp.

I find that most spearfishermen already know about this technique, while it’s often new to anglers. I think this is probably due to two reasons: One, spearfishermen already have a knife, and two, they’ve caused the fish to suffer more than a fishing hook typically does, so they are quicker to put the fish out of its misery. Most spearfishing knives are even designed ultra narrow to make it easier to stab through the hard brain case.

I personally use the Kona Kill Knife from Mako which is excellent. You can pick it up here on Amazon.

If you fish mainly from a boat, consider getting this Ikejime kill spike which is a bit safer and easier to use… of course you could also save your money and just get a cheap awl.

After ikejime, bleed the fish

Once the fish is brain dead, it’s almost always best to bleed the fish out. Draining the blood improves the quality of the meat in most fish species. When you see a brown line running along the otherwise white or pink flesh of a fish, that’s a bloodline, and it usually has a bad taste. Bleeding the fish greatly reduces the size of these bloodlines.

To bleed the fish, cut behind the gills with your knife facing toward the fish’s head. Slice from top to bottom until you see blood flow, then repeat this on the other side. Submerging the fish in water to bleed out will remove more blood.

Besides being much more humane, ikejime makes fish taste much better. It’s hard to overstate just how much of a difference this makes, but it is majorly significant.

Most anglers probably don’t realize this difference, because they will usually eat their catch within a day or two, or otherwise they freeze it for later. If you eat a fish quickly, it matters much less how it was killed, but if you use ikejime, not only will the fish stay fresh longer, its flavor can actually improve with time.

I personally love to eat sushi and I usually reserve at least part of my catch for sashimi when I spear trevally, mackerel, tuna, and even snapper. But I will almost never eat it raw for at least three full days after catching a fish. I find that the flavor is fairly bland until around day four or five when it develops complex umami flavors that make it taste so much better.

If you don’t practice ikejime, I’d implore you to give it a try and let at least some of your catch age in the refrigerator for four or five days. I promise you, the difference will be mind-blowing.

It is even possible to dry-age fish in the same way prime steak cuts can be aged, but this is only possible with the cleanest flesh, meaning the fish must be killed with ikejime.

Ikejime has already spread well beyond Japan. Chefs all over the world who insist on only the highest quality ingredients are leading the charge. Smaller-scale commercial fishermen looking to boost their revenue without upping their volume are heeding the call and starting to implement the practice.

This story about about a British fisherman who teamed up with a Japanese-British sushi chef to learn ikejime and grew his business as a result is well-written and worth a read.

If you’ve tried ikejime, I’d love to hear about your results. Please drop a comment below and let me know if you’re an angler, a spearo, or whatever else. It would be awesome to hear from a catfish noodler who tried ikejime 😉